The last letter from John Kaine in December 1863 indicated that Aunt Bess was “missing in action”. I was relieved to discover that she was alive and had never left Ireland after all. Aunt Bess was still contemplating emigrating to Canada as evidenced the information provided by John to her on what to do on arrival. “As regards meeting you in Quebec I will do it if you wish but the better way would be to get your things booked in Quebec for Seaforth and when you arrive in Quebec you could telegraph to Mr. Cluff to Seaforth and I will meet you in Quebec or Stratford“

Aunt Ann and her husband are at my place today and Uncle William in coming from my Fathers brought your last letter by which I was given to know that you were well. I was glad to hear it and I am glad to be able to let you know that we are all well and that we got Eliza married about two weeks ago. She lives with two miles or so of Ann. I think that she has done well. I have no particular news to send you only that I have moved from Dungannon to Gorrie. I am at the store again. I moved here in December. I like this place very well. I am in a store with my cousin James Young. I do not know whether I told you that we had got another young daughter. As to the name of the manager of the bank at Goderich I do not know but if you get a check on the Bank of Upper Canada at Goderich it will do. As regards meeting you in Quebec I will do it if you wish but the better way would be to get your things booked in Quebec for Seaforth and when you arrive in Quebec you could telegraph to Mr. Cluff to Seaforth and I will meet you in Quebec or Stratford which ever you will think best when you land but before you start write to let us know when you start and the name of the Vessel but do not on any account send your money to any Solicitor in Goderich. Get the check on the bank and you are all right. With Love to you and all friends

I am Dear Aunt

As I was rereading the letter, the word “telegraph” leapt out at me. I had believed that the only way to communicate was by mail and discovered in my research that the telegraph had been invented in 1844 but did not reach across the Atlantic until 1866.

“In Canada, telegraph lines were strung along railways, using available electric lines. As a result, the Canadian Pacific Railway (CPR) company offered telegraph services. Partly thanks to the CPR, a trans-Canada telegraph line was completed in 1886 between Nova Scotia and British Columbia —one year after the completion of the transcontinental railroad, which also stretched from Nova Scotia to British Columbia.

The first attempt at transatlantic telecommunication occurred in 1858, but it was not until 1866 that a functional telegraph cable was permanently laid between Europe and North America. At a time when ships took more than 10 days to cross the Atlantic, telegraph messages now took, in optimal conditions, only a few minutes.” www.historymuseum.ca

But in 1864 with Aunt Bess still in Ireland, the family communication remained limited to letters.

John gives lots of general family news to Aunt Bess about recent births and marriages but mostly focusses on travel details. Many questions remain for me related to how the other family members mentioned are related: Aunt Ann, Uncle William and cousin James Young who works in a store. More research to be done! 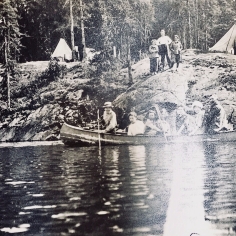 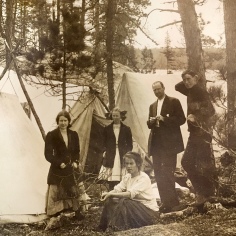 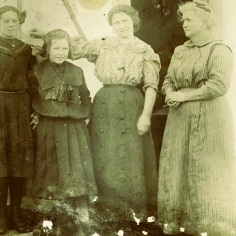