After travelling and working as a teacher in the Canadian West in the early 1920’s, my grandmother Jean Wilhelmine Inglis made her way back to Ontario and took a position in Timmins, a town in Northeastern Ontario that was thriving with mining and forestry industries. By this time, Jean had been working for almost 10 years and was probably wondering if the more traditional role of wife and mother was to be part of her future. Twenty-one was the average age for a women to get married in those days and she was getting closer to thirty. Well, her destiny was soon to unfold.

I do not know the details of how they met but a young Presbyterian minister, the Reverend Irving Brigham Pentland Kaine came to Jean’s home town of Engelhart, and she was soon became Mrs. Jean W. Kaine. I am glad she did because otherwise I would not be here to relate this tale of her life and times!
The portraits of Jean and Irving from 1925 show two very serious looking people though they seem to brighten up in subsequent images, perhaps enjoying wedded bliss and the excitement of starting a new life together!

Jean Inglis 1926 as a teacher in Timmins 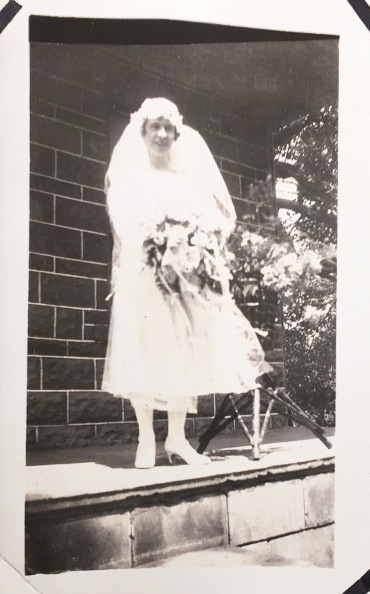 My grandfather, Irving Kaine was a tall fellow, dark haired and lanky at 6 feet 2 inches in comparison to small but mighty Jean at 4 feet 10 inches. A wedding photograph was the first of many throughout their lives that showed Jean on a step or a ladder for her face to appear on the same visual level as Irving’s. He came from a family who emigrated from Ireland to Huron County in southwestern Ontario in the 1850’s. Note: The history on the Kaine side of the family was mentioned in Episode 1. Cornucopia or Curse and more will be revealed in future episodes.

Irving was born in Blyth, Ontario in 1900, and grew up in Cottam, a farming town in Essex County near Windsor, Ontario where his father was a minister at the Methodist Church. Irving, or Gramp as we called him, was a man of immeasurably fewer words than his wife Jean so I know very few stories about his experiences growing up. One of the few he told me related to his high school days. To attend high school in a nearby town, it was necessary for Irving to cycle from home every Sunday and stay at a boarding house during the week. It seems that the boarding house proprietors were notorious for locking up the larders (food cupboards) at night so as a growing young man he was often hungry. Of course, there were no McDonalds restaurants or local convenience stores for a teenager to supplement his diet, so Irving’s mother would send a paper bag of boiled potatoes with him so he could make it through the week. I was deeply appalled at the idea of him having little else to snack on but a bag of cold boiled potatoes until I recently discovered that boiled potatoes are sort of a wonder food! I learned on a healthy eating website that a large, unpeeled boiled potato is rich in B-complex vitamins and essential minerals and can give you half of your daily requirement of vitamin C. Who knew! Obviously his mother knew about nutrition and he was able to successfully finish high school and go on to university in Toronto to become a minister.

Once Jean and Irving were married, he took a position in the town of Orangeville, Ontario, a town about fifty miles north west of Toronto. So Jean left northern Ontario and her job as a teacher (married women were not allowed to hold a teaching position in the 1920’s), to take on the new job of a minister’s wife. Her fashions suddenly changed from the latest off the New York runway to a more matronly style befitting a married woman.
To be continued